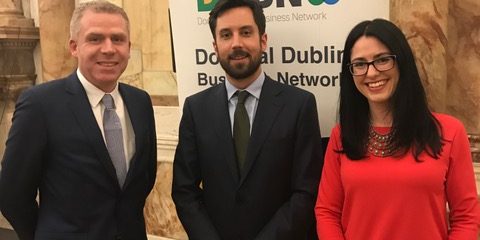 The challenge of creating innovative housing solutions was on the agenda at the most recent meeting of the Donegal Dublin Business Network (DDBN) as Eoghan Murphy TD, Minister for Housing, Planning and Local Government, addressed the organisation.

A panel discussion on the subject of housing took place at the group’s April gathering in Iveagh House on St Stephen’s Green, followed by a Q&A session overseen by DDBN chairman Paul Doyle (MD of Bannon Commercial Property Consultants) and committee member Danielle Conaghan (Partner in Arthur Cox). Minister Murphy was joined on stage at the event by two other guests of the network. Margaret Sweeney, a native of Kilcar, is CEO of IRES REIT Plc – a company that is Ireland’s largest private landlord with more than 2,500 units.The third industry expert present was Richard Barrett, founder of Bartra Capital Property, a development and investment platform active in areas including private residential development, social housing, nursing homes, commercial real estate and renewable energy. Bartra recently acquired a holiday resort with 27 homes on 186 acres of land in Carrigart.

Making his introductions, Chairman Paul Doyle acknowledged the high calibre of speaker who had joined group members to discuss a topic that has dominated political and social debate in recent years. An open and informative discussion lasting almost 90 minutes followed and the topics debated included the cost of housing delivery, affordability and access to funding.

The key role of the National Development Plan and Project Ireland 2040 were referenced throughout the debate in terms of how they aim to attract a more even spread of national investment into regions including the north west, where Letterkenny has been identified as a centre for regional growth. One interesting idea advanced towards the end of the evening involved embracing affordable opportunities for converting commercial premises in town and village centres that have been left vacant for many years into residential housing, thereby reintroducing a soul back into towns and villages in regional areas.

Wrapping up the event, Danielle Conaghan acknowledged and thanked the panel for their openness, and observed that a fast fix to the current housing situation was not going to be easy. She added that it was encouraging to be advised that the private sector was now embracing government policy and opportunities to stimulate a more rapid supply of housing.

You can join the DDBN here.