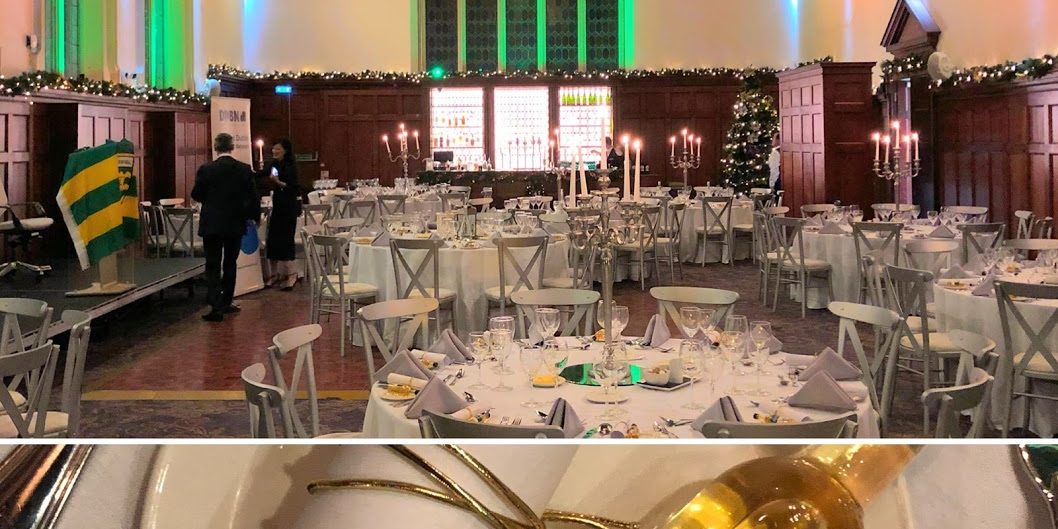 The Donegal Hospice is set to benefit to the tune of €15,000 following a highly successful fund-raising dinner organised in the capital recently by the Donegal Dublin Business Network (DDBN).

The organisation’s second Christmas gathering took place at the Clayton Hotel in Ballsbridge. Sponsored by the MCR Group and Bannon Commercial Property Consultants, it once again brought together well over a hundred members of the Dublin-based business community who have strong County Donegal links. Each guest received a favour bottle of Silkie Irish Whiskey. Generously donated by the Sliabh Liag Distillery.

Chairperson of the Donegal Hospice Grace Boyle was guest of honour at the gathering. Grace said people would be very surprised to learn how many counties in Ireland didn’t have access to a local hospice organisation and she paid tribute to Isobel Moore, and her husband Sean, who had been mainstays of the Donegal Hospice movement for more than three decades.

Grace assured those present that every penny raised in support of the Donegal Hospice benefits those in need. “We get many and varied requests and we do what it takes to ensure that these people are supported. It varies from those who require a bed to those who may need nursing support, or it might be a special car seat for a sick child so that they can travel with the rest of the family. In all cases we are supportive and prudent, and our constitution dictates that all our funds must be spent on palliative care in Donegal,” she added.

DDBN chairman Paul Doyle thanked those who had bought tickets and attended the fundraising dinner. The Letterkenny man also paid tribute to the generosity of DDBN members and friends who had generously donated prizes for the event’s raffle and auction. “The DDBN committee is absolutely delighted to be able to raise such a significant sum and we know that these funds will be put to very good use in Donegal,” Paul added.

The auction was moderated in entertaining fashion by award-winning broadcaster and Ballyshannon native Sean Perry. The DDBN wishes to thank the following businesses and individuals who supported the Donegal Hospice by purchasing the following items:

Established in 2017 to encourage Donegal business people based in Dublin to network, refer business and to share contacts with each other, the network now has more than 250 members and holds regular events. Membership of the DDBN is open to those who have a place of business or are employed or engaged in business (i.e. you must have an office and must be active) in the Greater Dublin Area and are from or have strong connections to Donegal.

Information on the network and its activities are also available by following it on Twitter @DDBN2017 or by connecting to the “Donegal Dublin Business Network” LinkedIn Group.