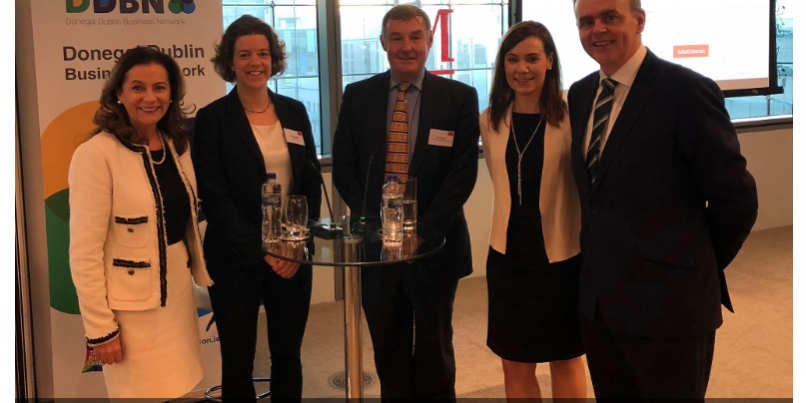 IRRESPECTIVE OF BREXIT OUTCOMES, DELIVERING ON THE A5 DUAL CARRAIGEWAY CORRIDOR BETWEEN DUBLIN AND DONEGAL MUST REMAIN A GOVERNMENT PRIORITY

Regardless of how Brexit eventually turns out for the North West, the Irish government must continue to prioritise the improvement of Donegal’s connectivity with the rest of the country, particularly via the external road network, a business meeting in Dublin has been told.

The importance of following through on commitments the proposed A5 dual carriageway transport corridor through Northern Ireland to Dublin was a recurring theme at the event, titled Brexit for Donegal: Trick or Treat.

The breakfast discussion was organised recently by the Donegal Dublin Business Network. The DDBN was established almost two years ago to encourage Donegal business people based in Dublin to network, refer business and share contacts and insights with each other.

It was held in the Dublin offices of the legal practice Matheson on the city’s Sir John Rogerson’s Quay with Karen Reynolds, a partner in Matheson from Letterkenny, the event host.

The event featured a panel discussion between three leading members of the Donegal business community – Deirdre McGlone of Harvey’s Point Hotel, Rosy Temple of Magee 1866 and Ian Ireland of the Donegal Investment Group plc. Although operating in different sectors, all anticipated a very significant impact on their business if a hard Brexit was the outcome of negotiations between the UK and the EU.  Each reiterated that Donegal’s unique rural setting and culture would remain key to the county’s success when the dust on a Brexit agreement had settled.

Deirdre McGlone said that support from State agencies to businesses operating in the tourism sector in Donegal was improving. The hotel believes it will be able to manage their supply chain but the consequence in terms of UK customers is a concern.  She said Harvey’s Point would continue to focus on what they do really well and broadcast a message that Donegal is open for business, all year round.

Rosy Temple stated that the worst case scenario – a hard border with duties – would result in a price hike for end consumer because the majority of Magee yarn comes from a world renowned area of Yorkshire. Margins in the high end retail business are already slim and increased operating costs forced by Brexit could lose the company its customers. She added that the 152-year-old company had cross-border employees – those working in the North and living in the South and vice versa.

Ian Ireland shared a number of examples with the audience that illustrated the reliance of Irish and Donegal food sector businesses on UK markets, including the fact that 20% of all Irish milk is converted to cheese and exported to Britain. He added that proper solutions were missing from the debate. At the moment, Ireland and the UK had a slick, well-defined supply chain but a border would increase cost and reduce the quality of food.

Ian also had fears on the possible long-term implications for Ireland within the EU on the departure of its nearest neighbour.  “We need to consider carefully how Ireland will be viewed in the EU after Brexit. It may be that we have lost our closest traditional ally.  Ireland is the Aran Islands of Europe – we are 1% of the EU. In 5 / 10 / 20 years, will the rest of Europe view us as an off-shore tax haven that doesn’t pull its weight?  We need to build new alliances in Europe,” he concluded.

Membership of the DDBN is open to those who have a place of business or are employed or engaged in business (i.e. you must have an office and must be active) in the greater Dublin area and who are from or have strong connections to Donegal. The annual subscription for 2019 is €30 and those interested can enrol online by clicking the membership section at www.ddbn.ie